Industry and Conservation Together

I have been in the palm oil industry for many years, as I am the third generation of my family to manage palm oil estates, after my father and grandfather. My perspective is that over the past 100 years, and the long history of oil palm in the region, a lot of things were done in a sustainable manner but were not documented or recorded as such. Yet in the past, nobody seemed to pay much attention to sustainability, or it was the least of their priorities. It was not considered important. However, I have observed many things that can be done in a sustainable manner that would far exceed the minimum requirements set by the Roundtable on Sustainable Palm Oil or any certification body. It is a matter of how you look at it. Oil Palm exploitation is not an industry that should be seen as “black and white” and in which palm oil is a bad product. It can be cultivated and exploited in a way that is profitable and does not destroy wildlife populations and nature. But it is fear of failure and venturing into unknown territory that holds many people in the industry back. They don’t want to try something and not succeed. Yet with the willingness to enter into this unknown territory, we are in a position to revolutionize the industry. The oil palm industry is waiting to look at things in ways that are very different and better for the planet.

The Melangking plantation owner and I have been willing to try to do things differently. We have partnered with HUTAN in Borneo to build corridors for wildlife and to create suitable habitat for it. It has been a tough journey, because many people try to stand in the way and jeopardize our efforts. But we are now on the right track. If everyone would start to see things in a new way and face up to the realities that are in front of them, as well as have the courage to try something new, we could together make an enormous difference. Each plantation can only enhance what they have. However, if they have 10,000 hectares like we do (which makes us a mid-size player) and set aside a small area for wildlife (20 to 300 hectares), or as much as they can for conservation, imagine what a difference it would make. Imagine if all plantations did that? It wouldn’t replace the natural habitat that has been lost, but wildlife could thrive. Humans and wildlife could coexist and both survive on the planet. It is about coexistence. Some people think a fence should separate humans from nature, with each staying on their own side. But that isn’t coexistence.

It is true that we have faced many challenges. But we have been honest and straightforward and have tried to go beyond the minimum requirements set by any standards or certification framework. We want to do more. Financial benefit isn’t the only goal, and it isn’t enough. As the saying goes: “How much is enough”? We do want to survive as a business, but we also want to leave a legacy, something that will benefit all. We have taken enough from nature. We need to give something back and make changes and make a difference.

It has been a big surprise to many in the oil palm industry to see us working together with NGOs, and it has opened many people’s eyes. We now see some of our colleagues also starting to copy this model, and we are starting to see real positive impacts.

My personal motivation for developing this approach and pushing for such a model based on valuing and respecting nature is my Islamic perspective. It is stated in the Qur’an and hadith that it is every individual’s responsibility to take care of every part of creation that God has created. As a Muslim, you have to think 10 times before you break a branch from a tree. Not everybody does that, and many seem to forget that. But I believe it is my responsibility to care for nature and for all creatures. Plantations have a very negative reputation, but I know we can make a difference by caring, respecting, and trying to protect nature and all life. And my greatest satisfaction and joy is seeing the wildlife roaming the plantation without any fear of harassment. ▅ 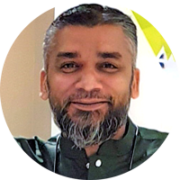