I was born and have lived my whole life in the village of Makao, which is located on the banks of the Motaba River in a forested region of northern Republic of Congo. I am a Ba’aka, from the Bambenjele tribe. Early on in my life I began hunting, using traditional methods like nets and spears to provide food for my family. At that time, we were never worried about running out of food, as the forest was large and there were always plenty of animals such as duikers and monkeys available. This all changed with the arrival of guns and the bushmeat trade. Like many autochthones, original inhabitants in Makao, I became employed as a hunter, supplying meat to dealers to sell in distant markets and towns. I earned very little money or food for the hunting and was treated disrespectfully by my employers. It was not long before the wildlife began disappearing as a result of the overhunting, and the well-being of the local human population suffered.

This began to change with the arrival of conservation scientists in northern Congo and the village of Makao nearly 30 years ago. I took a chance and accepted a job as a tracker in a walk across Africa called “Megatransect.” Following this mission, I joined the Goualougo Triangle Ape Project (GTAP), where I have been an ape tracker ever since. Working for GTAP has made me realize how important it is to conserve wildlife and the forests, and that one can earn a living while protecting special resources like elephants and apes. At the same time, my job has provided my family and me not only with clothes, but a house and access to medical care. When my children grow up, I would like them to be involved in conservation as well. I’m not alone in this respect, as most autochthones my age in Makao have given up hunting for work in conservation. In fact, many of my colleagues are now involved in advocating for wildlife protection. As a result, there has been a slow return of wildlife, even elephants, to the forests of Makao, which is greatly appreciated.

Another noticeable outcome of our livelihoods being linked to conservation is the respect we receive from our colleagues and peers. In the field, I am appreciated for my knowledge and courage and treated as an equal with all others, which is really satisfying. In the community where I live, I have had the honor of being elected to serve as chief of the village, representing all the autochthones of Makao. In this role, I spend a great deal of time educating villagers about the importance of conservation and coexisting with wildlife. Our efforts to coexist are paying off. I do not want us to have to explain to our children and grandchildren that elephants and apes disappeared once again from the forests of Makao because of over exploitation during our lifetimes. This would mean the loss of such important aspects of our cultural heritage and knowledge, which we are obligated to pass from one generation to the next. It would also mean the disappearance of the wildlife we have worked so hard to bring back and now view as a normal part of our natural world. ▅ 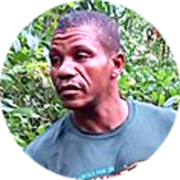 I was born in the village of Bonda, in northern Republic of Congo. I identify Bomassa as my home village, as I spent most of my life there. I’m a Ba’aka, from the Bangombe tribe. Like many children in the region, I grew up hunting with my father, as it was a tradition. My grandfather also hunted, and it was not uncommon for us to eat ape meat. It was essential to hunt to provide the family with food, and we didn’t know at the time that it was dangerous to our health to consume these species or that in time they would become protected. I found hunting to be physically dangerous, however, as we encountered elephants, gorillas, and buffalo, which at times reacted aggressively towards us. Besides being dangerous, it was also difficult work, and I started to think about giving up hunting for a job less risky.

At that time, other job options were not readily apparent to me. I was given the opportunity to go to school though, and this is where I became aware of the conservation projects being initiated in the area and the growing idea of protecting our flora and fauna. The importance of research for facilitating coexistence with wildlife was starting to be promoted at the local school in Bomassa, which was also the home of the Nouabalé-Ndoki National Park headquarters. Scientists presented conservation activities as part of a newly formed nature club called “Club Ebobo” (Ebobo means gorilla in the local language). I was among the first cohorts of students to be a “Club Ebobo” member!

This is when I embarked on a new career path. I took a job as a forest guide, working on a conservation project in 2000. Excitingly, this required me to use the considerable forest knowledge and skills I had learned from my father and grandfather. Yet, it did not involve endangering myself in an effort to kill an animal and was instead ultimately aimed at protecting wildlife and our forests. My traditional knowledge and skills enabled me to earn a living identifying the species of animal that had left the signs or tracks we encountered in the forest. My job would be to relay this information to a research assistant, who was typically a university graduate from Brazzaville, the capital city. The research assistant would then record the information in a book, followed by entering the data into a computer at night once back at camp.

Over the years my interest and abilities grew, not only in identifying animal signs but in recording data. I was keen to be more involved and further develop my skills, and these traits fortunately were recognized by project directors. I began using my ability to read and write with new technologies, computers, and mobile devices and attending training workshops. These opportunities opened up greater career options. I am now one of the only Ba’aka who have been trained as research assistants in the region. In this role, I am in charge of leading teams to collect behavioural and health data on known gorilla groups at the Mondika Gorilla Project. Following these individual apes over the years has given me a great appreciation of how close gorillas are to humans. These individuals are like family to me now, and I feel we must do all we can to protect them. This includes talking with people in the village about my job and why it is important to protect and coexist with wildlife.

It also involves taking my family into the forests every chance I get to share what I have learned about gorillas and all the other wildlife and flora. My aim is to pass on this traditional knowledge and culture to my children so that they will follow in my footsteps and choose careers in conservation. They will be the next generation of scientists protecting our coexistence with wildlife rather than hunting it. ▅ 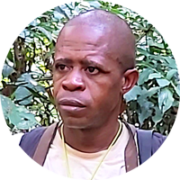 I was born in Ouesso, northern Republic of Congo, at a time when this town was still considered part of the frontier region. I’m a Bantu from the Imassa tribe. My parents knew nothing about conservation, and to me they looked at wildlife as a natural resource to be exploited, rather than to coexist with. It was not uncommon to see elephant, gorilla, and chimpanzee meat in the markets of the major towns and villages when I was younger. Most of the people I knew relied on bushmeat for food, and some even earned a salary from trading it. Not surprisingly, wildlife was becoming scarce around the forests surrounding Ouesso when I was growing up.

In addition to exploitation of wildlife, logging was another widespread industry. For my first job, I worked for Congolaise Industrielle des Bois (CIB), the largest logging company in Central Africa. CIB was working in the concessions around the Nouabalé-Ndoki National Park; I was part of a team involved in the marking of tree stems to be cut down. In 2005, however, I switched jobs and careers and started working for the Goualougo Triangle Ape Project as a research assistant, protecting wildlife and forests. In that role, I immediately gained a great deal of appreciation for the Ba’aka and their traditional knowledge of the flora and fauna as well as their work ethic. The success of the research activities depends on their skills and collaboration, and I continue to learn from their wisdom of living close to the forests throughout their whole lives.

This time period was unique because of important changes occurring in terms of conservation. People in the villages surrounding the park were just becoming aware of the health risks of eating apes and that dealing in the trade of protected species was illegal, with consequences if caught. Encouragingly, conservation projects have had increased success. It’s now rare to see orphaned apes or other protected species in villages or markets. It takes a long time to change people’s minds and behaviour. I spend a great deal of time speaking with my family and friends about my work and describing how similar gorilla and chimpanzee behaviour is to ours.

My generation is among the first to receive some education about conservation, the importance of research, and the idea of living sustainably with wildlife and each other. We need to build on this success and pass on this information and our examples to our children. They will have a greater appreciation than previous generations since they are learning coexistence with wildlife and each other first hand, from their parents and families. Coexistence is now a part of our culture. It’s not only about conservation, research, and tourism bringing job opportunities but more importantly about learning how to protect our “home” for our shared future. ▅ 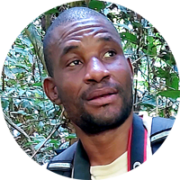