Winning with Tools and Reason!

The ability of humans to use reason in understanding their environment is a basic capacity. By thinking, humans become able to make changes and adapt themselves, so they can coexist with each other and nonhumans or animals and plants who share life together in one ecosystem.

Here in Indonesia, human-human conflict takes many forms: sometimes between local communities and companies (timber, mining, oil palm, and other extractive industries) and other times within local communities (between the indigenous and non-native people). At times, the private sector uses all its means to expel the community from their business area or area of influence. The community tries in various ways to remain in the area, including the village, which they claim as their customary or community land. But that ownership is difficult to prove because there is no certificate acknowledging or stating their ownership.

Animal conflict with humans has been going on for a long time, and the situation is worsening because of massive forest clearing for the wood/timber industry, oil palm plantations, mining, industrial plantations, and human settlement. Changing animal habitat makes food increasingly difficult to find, so the animals come out of the remaining forests and wander into community gardens or human settlements, creating conflict. In the end, it is always the animals who lose their lives.

How can we overcome this problem that has lasted more than three decades? Various approaches have been attempted, ranging from donor funding for those whose funds are constrained, to increased human resources, to truly conveying messages and educating people about living side by side with wildlife.

After many methods tried and lessons learned, the results are still insignificant. This raises the question of where or what is wrong: methods, people, or other issues? Poverty and lack of education are at the root of the problem. Local communities who live in and around the forest do not have many opportunities to fulfill their daily needs, not to mention the opportunity to go to school to obtain education. They go to the forest to get what they need. However, people from the city transform the forest on which local communities depend into logging areas, industrial plantations, mines, oil palm, and so on. Their use of the forest is exacerbated by poor spatial planning in the regions, especially around the boundaries of forests that are used as production forest, APL (the Indonesian designation of “areas for other use”), and conservation areas. Just as in conflicts between industry and animals, local communities are always defeated.

The damage has occurred; so, what should we do to overcome it? Or are we just standing still waiting for the government or donors or other parties to solve the problem? Of course we are not waiting, because time goes on, and we have to be morally and materially responsible to our fellow humans and wildlife, for the sake of our children and grandchildren, the next generation. We must mitigate and find solutions to the impacts of conflict, both human-human and human-wildlife, to address economic loss or poverty alleviation. The solution may be hard to implement justly, and it won’t solve the whole problem, but it is worth it to try.

I, somehow, agree with the “Payments for Enhancing Coexistence” scheme, which provides benefits to communities (monetary and non-monetary) linked to positive conservation outcomes and aims to achieve the dual purpose of promoting biodiversity conservation and alleviating poverty.

I also believe in investing in human resources in local communities by educating community members formally and informally through trainings. This builds their capacity and involves them in companies’ activities taking place side by side with their land, where they can bring their local wisdom, which must be preserved or guarded. They can also translate or simplify the terminology of donors and scholars and link them to local wisdom, because we talk to local communities with limited education and lack of understanding. Local people can make companies understand and want to embrace conservation as part of their responsibility to nature and fellow human beings. Local customs and wisdom embrace living in harmony with nature and wildlife and also could be linked to positive conservation outcomes in reducing human-wildlife conflict. Have faith in communities.

Many wildlife species are close to extinction, or at least threatened, because of human impact. The usual strategies of coexistence are to confine more and more wildlife habitat to smaller reserves, parks, or other fenced areas, to protect the remaining fauna in that location as well as the settled humans. We must correct the spatial planning, exchanging humans for wildlife, and draw a clear line on it. Strengthening of human resources across sectors (government, community, private) to build patrol and monitoring systems is needed to minimize conflicts and protect wildlife. The management of space and the behavior of humans and wildlife differ from one place to another. This is certainly a multistakeholder responsibility, and government must take the lead.

Another ongoing scheme, “Payment for Environmental Service,” must be well managed so the local community gets the benefits or rewards for the role they play in any form of coexistence. We need coexistence in the whole ecosystem, not just in patches. Indonesian central and provincial government must be actively involved. We need government leadership because when it comes to policy, it is government that has power and authority. The role of community and indigenous people in the landscape, in protection of their land, and in conflict resolution must be supported and facilitated well to let them continue to do the work. Assistance and capacity building in local economies is very important and must be sustained in the long-term. ▅ 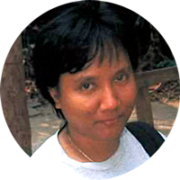